Anyone who has a Moon Suit in their collection likely has lost the rubber arms due to age. I currently have three moon suits. Two came to me with missing arms. One I bought 20 years ago with fully intact and working arms. Since that time the rubber has become brittle and the arms have cracked apart just like egg shells. Recently I decided to do something about that and restore all 3 moon suits.

I started my search for replacement arms on eBay and I did find someone selling their version of replacement arms. These were made from automotive hosing and lego claws. I very much liked the look of them but they were not poseable and would not work with the original hose and pump. Unless I can find replacements that are made just like the originals, using the air pump was likely out of the question. Thinking about this, I consider pose-ability as paramount. I started to look around for “found” items that I could modify into arms. After a lot of thought, I may have found something that may work for substitute arms. 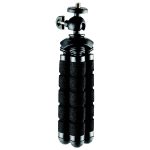 My idea is to use an inexpensive flexible tripod to build replacement arms. I can get one of these for under $2 online. I hope to modify two of the legs and retain the foam covering and the flexible core to act as arms. I’m still looking around for what to do about the hands but I’m sure I can figure something out. Perhaps I can make some matching hands with Fimo or some such thing.

I’ll document the restoration process here in the next few months once I do some more research (I’ll also post my research here too).

After waiting for several months for the delivery of the tripod, a package finally showed up and inside was … not a tripod. So I’ve placed another order and I’ll have to wait again. I order stuff from China all the time and this is the first time something has screwed up. What bothers me though is the time it’s taking to receive anything. Last year it would take 30 days to North America. Now it’s taking 60 to 90 days. Ugh!

One thought on “Moon Suit Arms”